Cirrus (ice) clouds play a crucial role in the global climate system and energy budget of the atmosphere, in that they reflect near-infrared radiation back to space (cooling effect), whilst reflecting thermal emission from the Earth’s surface back to Earth (warming effect). The net effect on the atmosphere is very important to understand. It depends on the cloud’s horizontal extent, vertical position, ice water content, and ice microphysical properties, all of which influence the cloud’s optical thickness. These parameters are currently poorly constrained in global circulation models, and represent large uncertainties in predictions of future climate.

We have developed a novel instrument concept to observe ice clouds and humidity that will allow us to retrieve these critical parameters. This instrument uses large arrays of detectors to make observations in the millimetre and submillimetre wavelength regions. It completely avoids the need for mechanical scanning, and has large advantages over the “traditional” heterodyne instruments proposed for this type of observation. Particularly, we benefit from high sensitivity, high spatial and spectral resolution, and we have access to frequency ranges not currently available with heterodyne technology.

This project will develop the existing outline instrument concept into a full instrument proposal, ready for application to follow-on funding opportunities. We will look at the science areas, over and above ice cloud studies, where we can achieve maximal impact, and trade-off instrument concepts to arrive at the optimal solution. 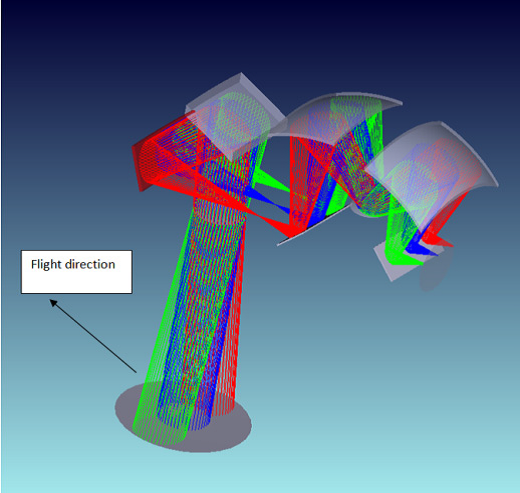 During the course of the project, the team were able to ascertain that the simple 2-D multispectral array based system would perform better than the ICI instrument for MetOp-SG, but that the performance enhancement would not be strong enough to justify the need for cooling the array.

The optimal instrument identified is one that makes use of on-chip spectroscopy, using kinetic inductance detectors in a different configuration. Such an instrument should have a very large impact in operational meteorology. Initial simulations show greatly enhanced resolution and accuracy for temperature & humidity retrievals. And at the same time, such an instrument would fulfil (exceed) all observational requirements for ice cloud observations for climatology applications.

The on-chip spectroscopy has been demonstrated in the lab, and currently has a TRL of 4.

This instrument concept has the full backing of the Met Office. It has also been presented at the European Centre for Medium Range Weather Forecasts, who strongly support it. The concept was also mentioned in a recent ESA GSP study report on hyperspectral imaging concepts. Full retrieval simulations are currently in progress, in preparation for a paper to be published in January 2016.

As a result of the CEOI-ST funding, the team has developed a very promising instrument concept, and a strong team. This forms the basis of a Horizon 2020 proposal that is now in preparation and will propose to build and fly an airborne demonstrator.